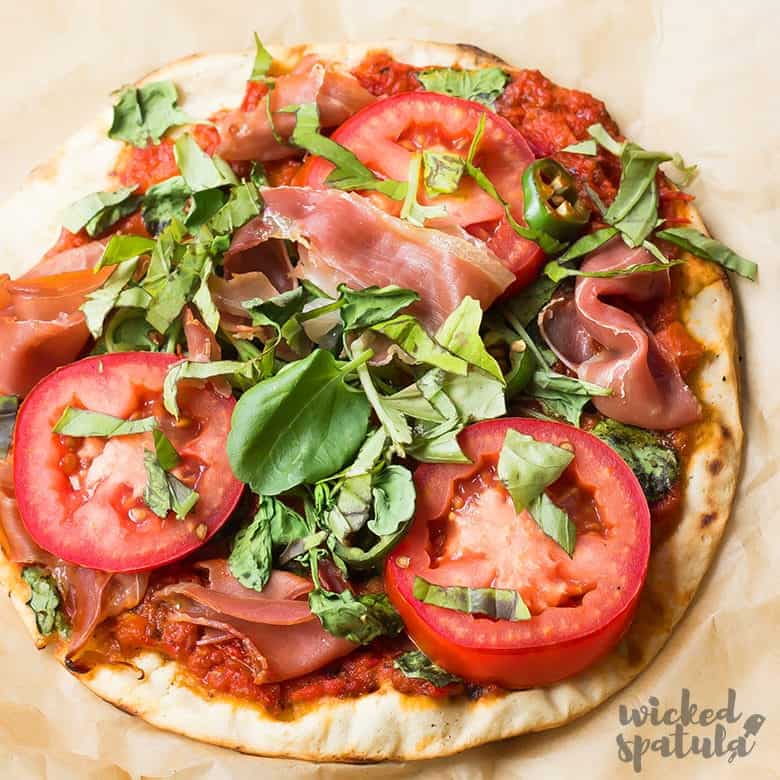 If you are looking for a go-to paleo pizza recipe, this one’s for you! I’ve been making 4-ingredient almond flour low carb pizza crust for years, but if you’re paleo without needing to be low carb, then this is the best paleo pizza crust to make! And, it has just THREE ingredients!

This paleo pizza crust recipe was sort of a fluke. One day I left the “tortilla” cooking a bit too long, and it turned crisp. JACKPOT! As soon as I saw what had happened, our taco night became pizza night and we haven’t looked back.

We used to grill pizzas like crazy before “going” paleo, but I used to only make cauliflower pizza crust, which wouldn’t hold up on the grill. Enter this paleo pizza crust. The paleo pizza dough is easy to work with, and it cooks up crisp on the outside and soft in the center, just like a good thin crust pizza.

You may have to use a fork to eat it though if you follow in my footsteps and turn your pizza toppings into a full-blown salad, but that’s up to you. It will hold up great as a handheld pizza if you use a reasonable amount of toppings. 😉

How To Make Paleo Pizza Dough

Everything about this paleo pizza recipe is perfect! It’s easy to make, quick to cook and so flavorful it’s impossible to resist. Here’s how to make the best paleo pizza crust ever…

First, mix together the ingredients:

That’s 3 basic ingredients, plus water and salt which we don’t count by convention. 😉

Now, just follow the instructions to cook your grain-free pizza crust either in the oven or on the grill!

How To Cook Paleo Pizza Crust

Before you cook your whole pizzas on the grill or in the oven, you’ll need to pre-cook your paleo pizza dough on the stovetop first:

TIP: If your cast iron skillet has been properly seasoned, you can skip the olive oil. You just don’t want the crust to stick to the bottom of the pan, or it will be impossible to flip.

TIP: The paleo pizza crust is ready when it is a golden brown color and crispy on the outside.

TIP: If you prefer, you can also cook the pizza crusts in the oven as well. They will take about 10 minutes to cook through at 400 degrees F. However, they will be less crispy than the stovetop method, so highly recommend the stovetop!

How To Make Paleo Pizza In The Oven

Cooking your paleo pizza in the oven is super simple:

How To Make Paleo Pizza On The Grill

If you prefer grilling, here’s how to make paleo pizza with toppings on the grill (yay, summer!): 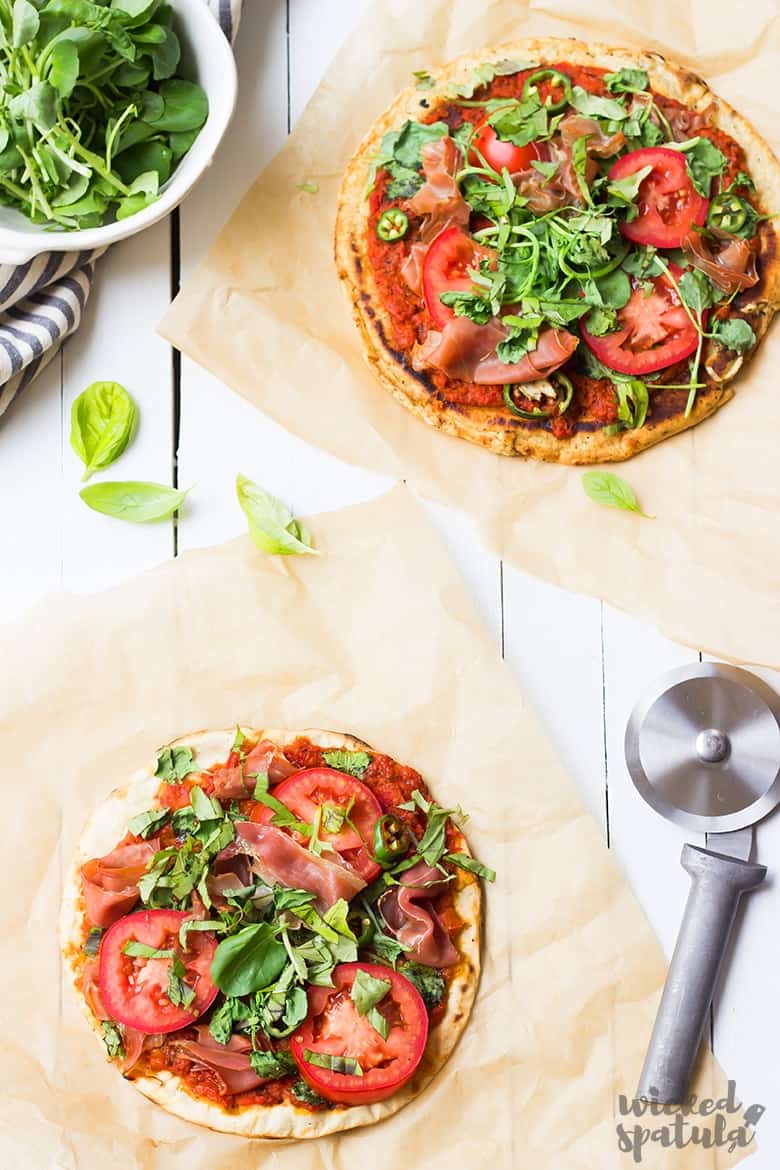 Oh, the toppings for this paleo pizza crust recipe are one of the best parts! Granted, the paleo pizza dough is so good you could eat it by itself, but we always want those toppings!

Here are some amazing paleo and dairy free options to try:

Overall, healthy homemade pizza can be completely customizable to fit your preferences.

I made my pizza with classic marinara, but it’s also delicious with basil pesto sauce! (Keep it dairy-free by omitting the Parmesan or replacing with nutritional yeast.)

Most pizza crusts are not too healthy and definitely not paleo friendly, but this one is. It has just a few simple, natural ingredients!

Can You Make Paleo Pizza Crust Ahead?

Yes, you can make paleo pizza ahead – it will keep in the fridge for 2 to 3 days.

You can store this pizza with or without toppings. But, be mindful of any watery toppings, like tomatoes, which might make it soggy over time.

If you want it to taste fresh, it’s better to store it without toppings and add the toppings right before eating. However, if you have paleo pizza leftovers, you can definitely keep those and they’ll be fine later!

To reheat paleo pizza, stick it in the oven or microwave.

Can You Freeze Grain-Free Pizza?

Yes, you can absolutely freeze paleo pizza dough. You have a few options: 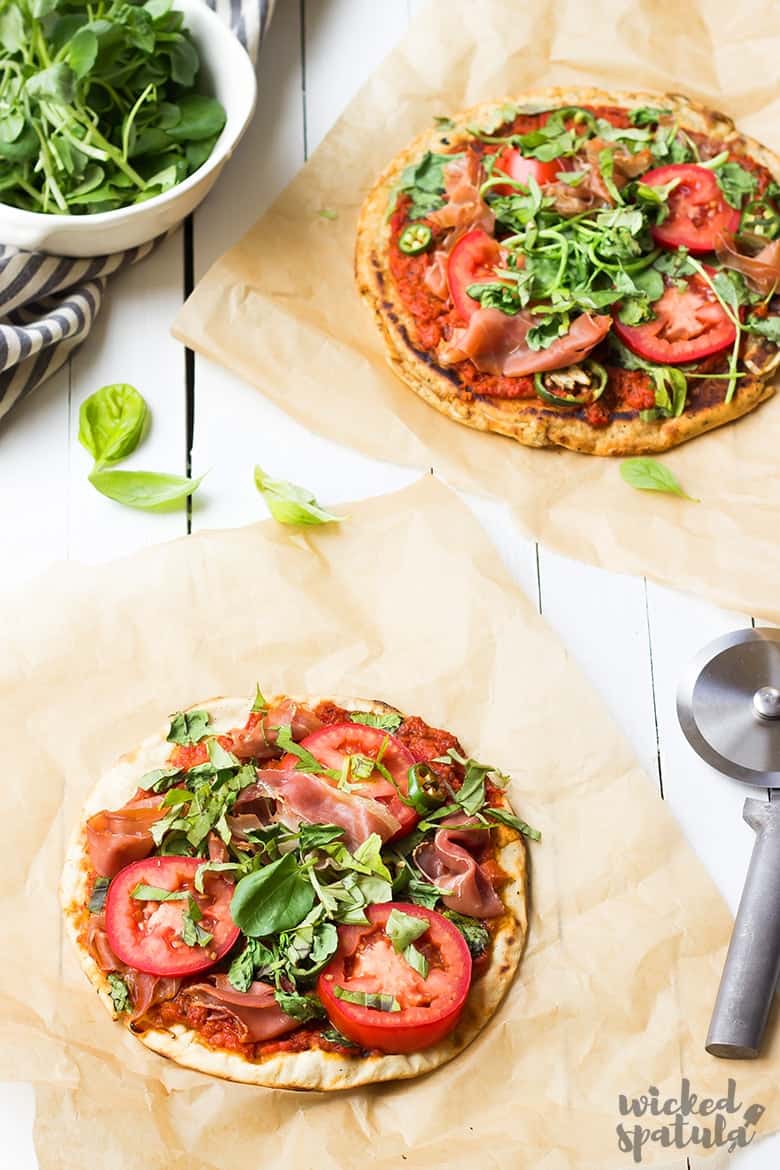 Here are some of my other favorite healthy pizza recipes:

The Best Paleo Pizza Crust Recipe:
Pin it to save for later! 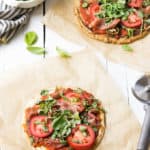 Learn how to make the best paleo pizza crust with 3 ingredients + 10 minutes prep! Includes instructions for paleo pizza dough in the oven or on the grill.

How To Make Paleo Pizza On The Grill

How To Make Paleo Pizza In The Oven