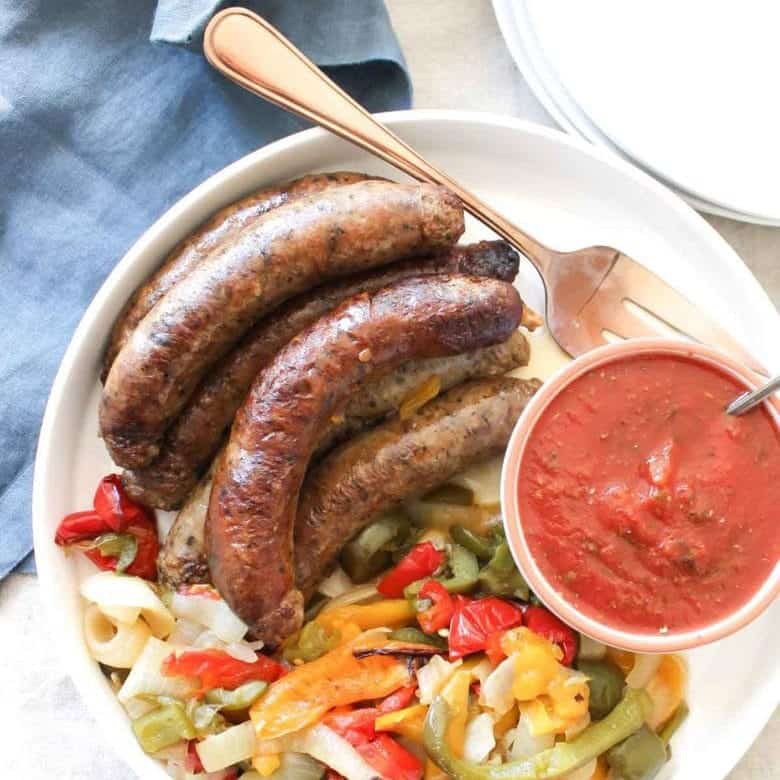 With my family’s busy weeknights, I often turn to easy paleo slow cooker meals – like this Crock Pot sausage and peppers recipe. With just 10 minutes prep and virtually no effort at all, easy slow cooker sausage recipes like this make dinner a breeze. And, Crock Pot sausage, peppers and onions make my whole family happy – even the kids, and even me with my preference toward low carb meals! This slow cooker sausage and peppers recipe is naturally paleo, low carb and keto friendly, but everyone else will enjoy it, too.

I love the ‘set it and forget it’ hands off nature of using the slow cooker. For this dish, you do need to give the sausages a quick browning in a skillet, but that takes all of 5 minutes and you can do it while you’re slicing up the peppers and onions. This recipe for Crock Pot sausages with peppers and onions comes together really quickly!

We make this dish pretty regularly and I think it’s one of the best slow cooker sausage recipes out there. 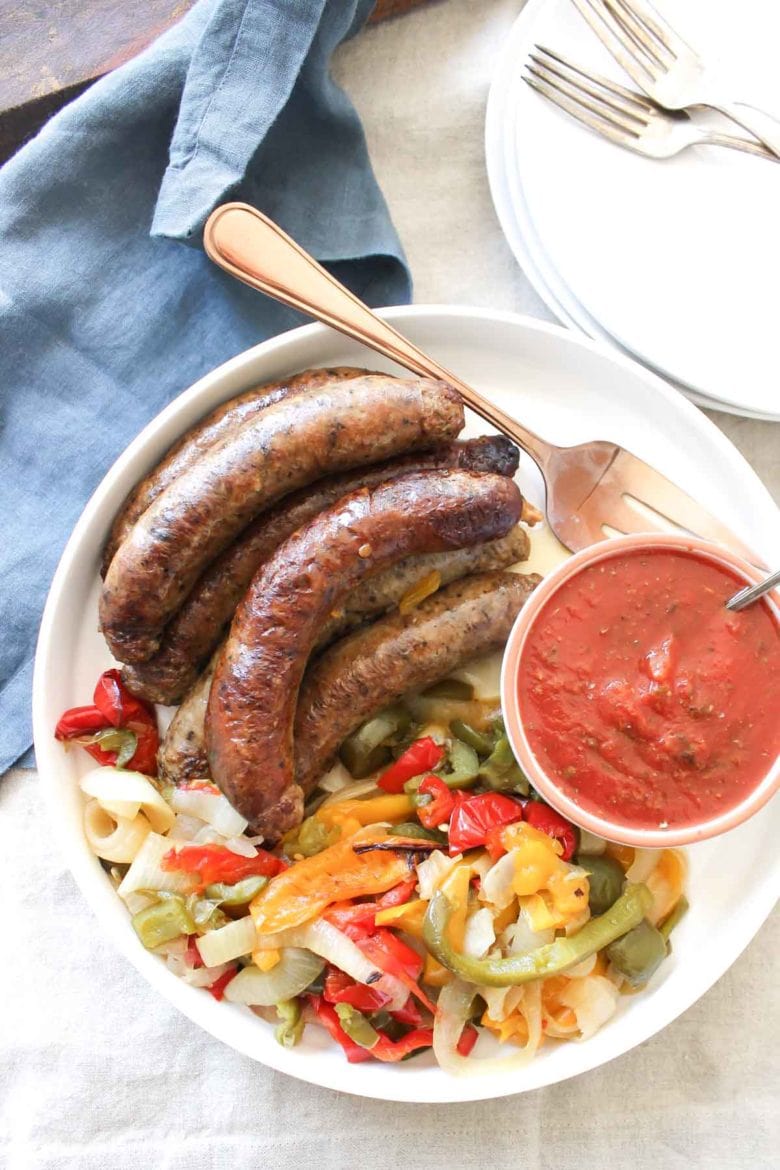 Is This Crock Pot Sausage And Peppers Recipe Paleo?

Yes. Provided you choose a brand of sausage that is paleo, everything in this recipe is suitable for a paleo diet.

What Kind of Sausages For This Slow Cooker Sausage Recipe?

I used kielbasa for these Crock Pot sausage and peppers. But, you can also make these as a slow cooker Italian sausage recipe instead. Any kind of sausage you like will work.

No matter what kind you use, I’m pretty sure this will become one of your new favorite sausage Crock Pot recipes!

Can You Put Raw Sausages In A Crock Pot?

Technically yes, you can put raw sausages in a Crock Pot for most slow cooker sausage recipes.

The one downside though is that they won’t look anywhere near as appetizing, and have a bit less flavor without the browning.

Unless you are in a crazy hurry, I’d recommend taking the few minutes it takes to brown your sausages in a skillet first. It’s such a quick thing to do and can be done in the time it takes to prep the veggies. 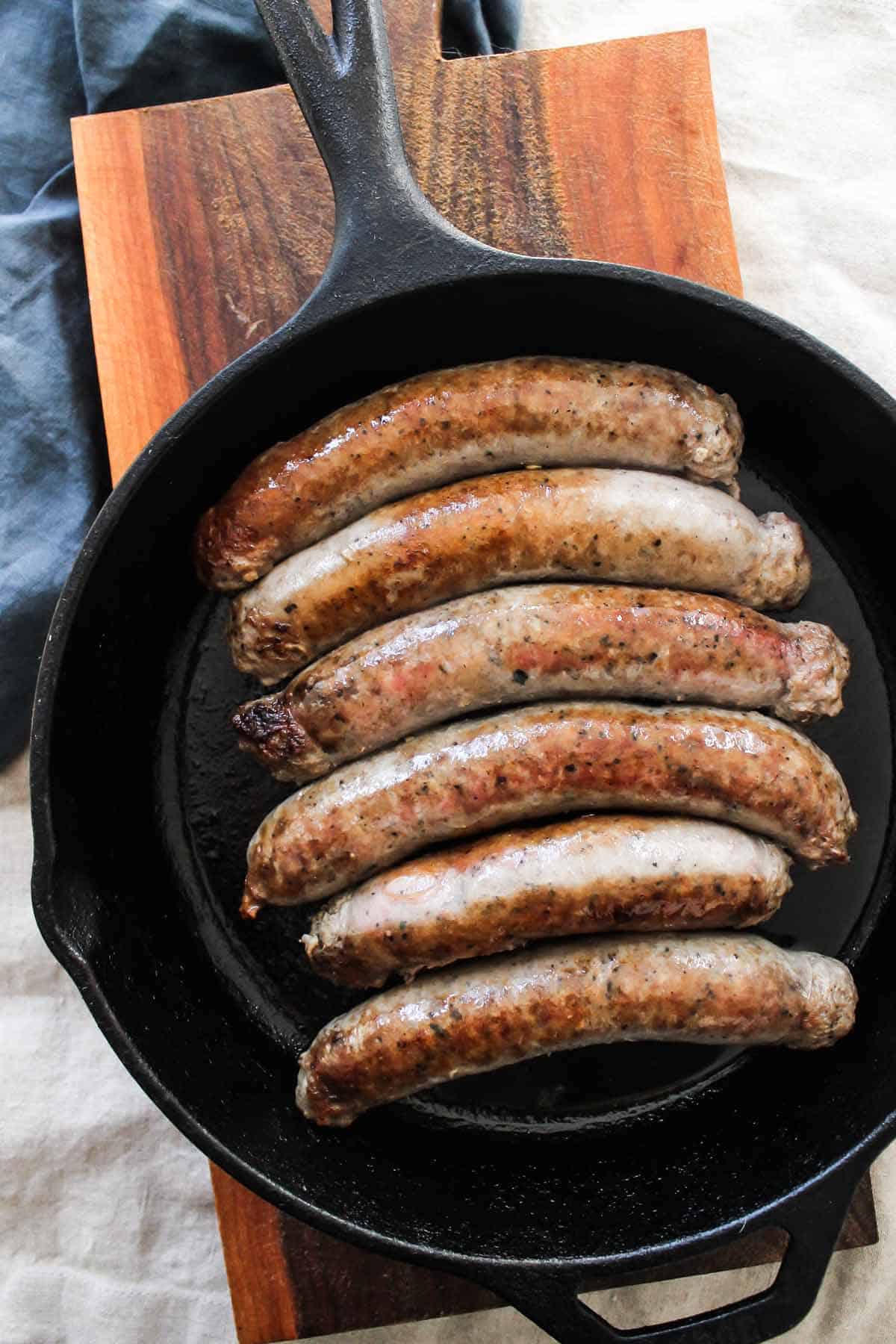 How To Make Crock Pot Sausage And Peppers

The beauty of this dish is that it requires next to no prep time. Ten minutes and you’re good to go!

Can You Make Slow Cooker Sausage And Peppers Without Onions?

Of course you can. Personally, I love onions and use them in so many dishes – but if onions really aren’t your thing then feel free to leave them out. It might not taste quite as rich and sweet without them, but will still taste delicious.

My husband adores this Crock Pot sausage and onions recipe served with a quick marinara sauce. To make the sauce, simply heat up a little olive oil and toast Italian seasoning for a few seconds before adding crushed tomatoes. Of course, you can also use store-bought marinara, which is about the same price as crushed tomatoes.

Any leftover slow cooker sausages are especially delicious for breakfast in an omelette or with a simple poached egg on top! 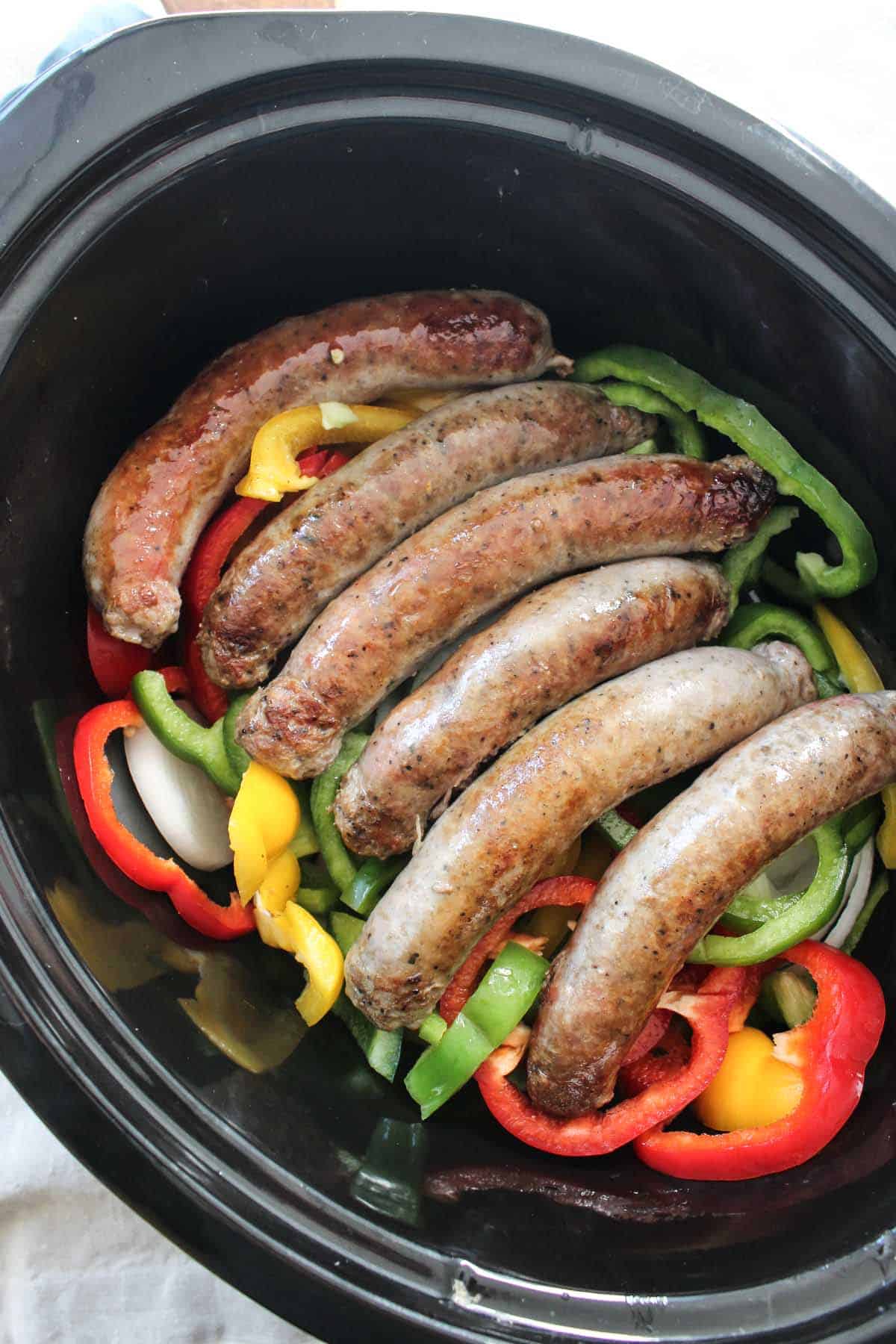 Can You Freeze Slow Cooker Sausage and Peppers?

Yes, you can freeze Crock Pot sausage, peppers and onions. If there are any leftovers – or you make a double batch – slow cooker sausage and peppers is a perfect recipe to freeze.

I freeze mine in sealed freezer bags in individual portions, so that it can be thawed out and reheated in the oven as needed. Just thaw out the portions well, then reheat in either the oven or the microwave. 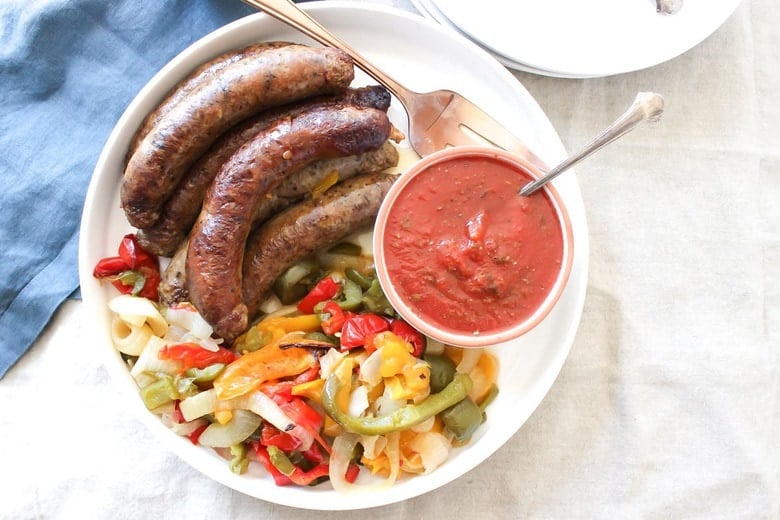 What To Serve With This Sausage and Peppers Crock Pot Recipe

I often pair these slow cooker sausages and peppers with other favorite make ahead recipes:

Sausages in a slow cooker also pair well with a salad, so try one of my paleo salad recipes for dinner.

Crock Pot Sausage, Peppers And Onions Recipe:
Pin it to save for later! 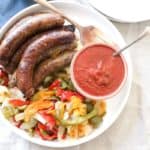 Video Showing How To Make Slow Cooker Sausage And Peppers:

Don't miss the VIDEO above - it's the easiest way to learn how to make Slow Cooker Sausage And Peppers!