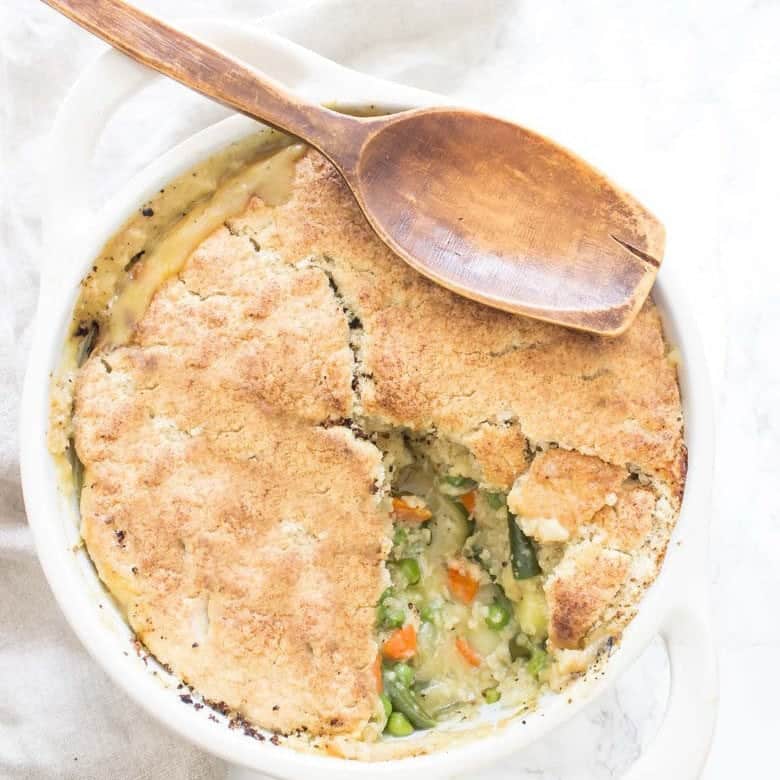 Every single time that I ask what recipes you’d like to see on the blog, so many people say paleo pot pie! Well, today’s your day because I have an awesome paleo friendly, vegan pot pie recipe for you. It even has a vegan pot pie crust.

I opted to go the classic route with the filling using peas, potatoes, carrots, onion, garlic, and green beans. (See my note about the peas if you’re wondering about those on paleo!) The creaminess in this easy vegan vegetable pot pie recipe comes from blending a bit of the potatoes with coconut milk to make a silky sauce that coats the rest of the vegetables perfectly.

If you have no reason for your paleo pot pie to be vegan, you can also opt to stir in some cooked chicken or turkey. It would make an equally delicious paleo chicken pot pie recipe if you want to add it in!

Either way, you’re going to love it. The filling is creamy, savory, and filled with beautiful spices, including rosemary, thyme, and black pepper. This vegan pot pie recipe is a perfect midweek family meal and also great for feeding a crowd.

I’m not gonna lie, I used to think pot pies were a big hassle to make. And a vegan paleo pot pie? Probably even harder, right?

Don’t worry, it’s actually really easy. There are a few steps, but they are all simple as can be: 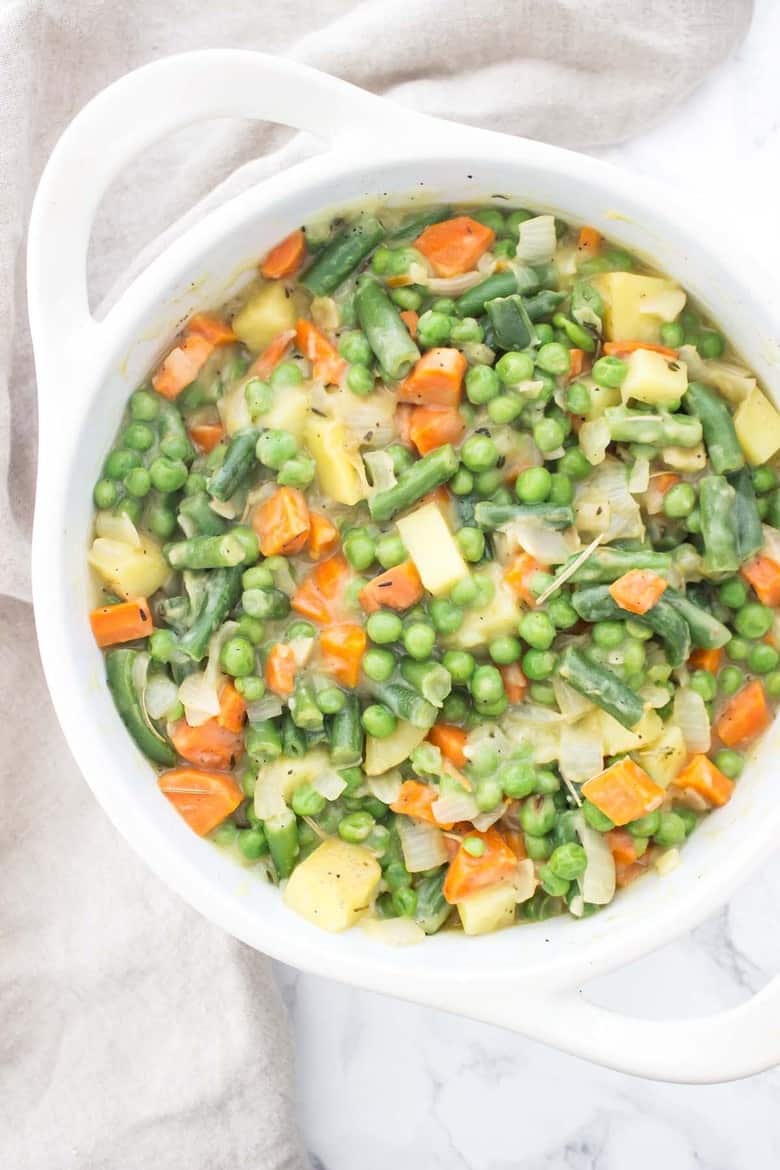 I didn’t bother with a bottom vegan pot pie crust recipe, since we all know that’s a total pain and pretty much impossible without eggs while being paleo-friendly. But you still get a fluffy pastry topping that’s crunchy on the top!

So even though a vegan pie crust is a tough cookie to crack, this top crust is a winner. And it couldn’t be easier. 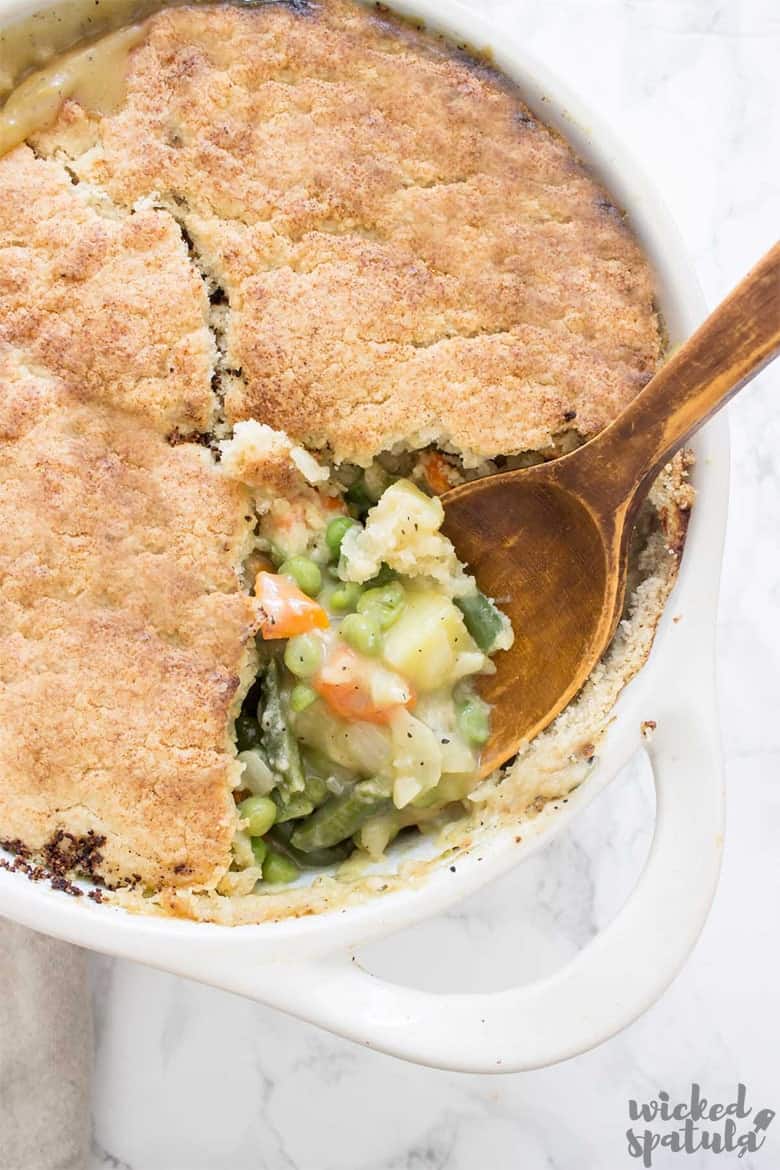 Are Green Peas And Beans Okay For Paleo Pot Pie?

This vegan pot pie recipe uses green peas and green beans, and some of you may be wondering how I’m calling this a paleo pot pie recipe as well. Aren’t those legumes? Technically, yes.

The reason that we avoid legumes on a paleo diet is that they contain a specific set of lectins and phytates, which can affect bioavailability of other nutrients or can cause gut damage.

However, edible-podded legumes, like green beans and peas, are actually quite different and many people (me included!) consider them an exception to the rule of no legumes for paleo.

Other types of legumes are harvested when their seeds are mature and dried, while fresh green beans and peas are immature, meaning they are much lower in lectins and phytates. And, the ones they do contain are pretty unstable, which means they can easily be deactivated through cooking.

Again, due to the addition of legumes to this homemade recipe, it isn’t strictly whole30 compliant. However by changing up the mixture of vegetables you could easily make this vegan pot pie recipe whole30 compliant as well.

If you prefer not to include them in your diet, then just leave them out! As an alternative, try asparagus, bell peppers, or zucchini (make sure to cook it down well to get rid of excess moisture).

Can You Freeze Paleo Pot Pie?

Yes, this vegan vegetable pot pie recipe freezes really well. You can store it right in the (cooled) baking dish if it’s freezer safe, or line it with foil first so that you can just store the foil wrapped pie without the dish.

When you are ready to eat it, allow the frozen vegan pot pie to thaw completely in a baking dish, before placing in the oven at 350 degrees F to reheat. Make sure your homemade vegan pot pie is piping hot before serving.

Or find all my paleo vegan recipes here.

The Best Vegan Pot Pie Recipe:
Pin it to save for later! 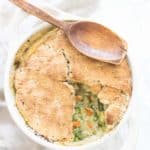 Easy paleo pot pie in under an hour! This hearty vegan pot pie recipe is packed with veggies, dairy-free creamy sauce, and the perfect vegan pot pie crust on top. It will be a family favorite!